This will be a page about things I find interesting in science.

HeLa  Hela or hela) is an immortal cell line used in scientific research. It is the oldest and most commonly used human cell line. The line was derived from cervical cancer cells taken on February 8, 1951 from  Henrietta Lacks a patient who died of cancer on October 4, 1951. The cell line was found to be remarkably durable and prolific, which warrants its extensive use in scientific research.

The cells from Lacks’s cancerous cervical tumor were taken without her knowledge or consent, which was common practice at the time. Cell biologist George Otto Gey found that they could be kept alive, and developed a cell line Previously, cells cultured from other human cells would only survive for a few days. Scientists would spend more time trying to keep the cells alive than performing actual research on them. Cells from Lacks’ tumor behaved differently. As was custom for Gey’s lab assistant, she labeled the culture ‘HeLa’, the first two letters of the patient’s first and last name; this became the name of the cell line.

These were the first human cells grown in a lab that were naturally “immortal”, meaning that they do not die after a set number of cell divisions (i.e. cellular senescence). These cells could be used for conducting a multitude of medical experiments—if the cells died, they could simply be discarded and the experiment attempted again on fresh cells from the culture. This represented an enormous boon to medical and biological research, as previously stocks of living cells were limited and took significant effort to culture.

The stable growth of HeLa enabled a researcher at the University of Minnesota hospital to successfully grow polio virus, enabling the development of a vaccine, and by 1952, Jonas Salk developed a vaccine for polio using these cells. To test Salk’s new vaccine, the cells were put into mass production in the first-ever cell production factory.

In 1953, HeLa cells were the first human cells successfully cloned and demand for the HeLa cells quickly grew in the nascent biomedical industry. Since the cells’ first mass replications, they have been used by scientists in various types of investigations including disease research, gene mapping, effects of toxic substances on organisms, and radiation on humans. Additionally, HeLa cells have been used to test human sensitivity to tape, glue, cosmetics, and many other products.

Scientists have grown an estimated 50 million metric tons of HeLa cells, and there are almost 11,000 patents involving these cells.

The HeLa cell lines are also notorious for invading other cell cultures in laboratory settings. Some have estimated that HeLa cells have contaminated 10–20% of all cell lines currently in use. 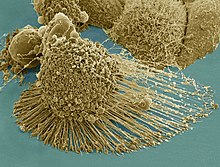 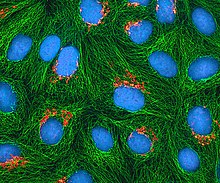