Here Are the Urban Highways That Deserve to Die

The Congress for New Urbanism once again ranks the most-loathed urban freeways in North America—and makes the case for tearing them down. 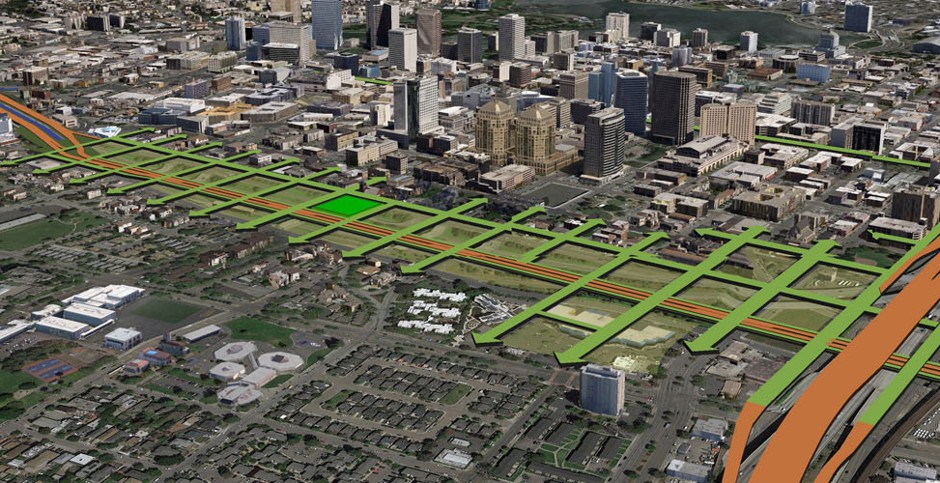 Replacing I-980 with a surface boulevard could bridge the gap between Oakland’s neighborhoods. Image from ConnectOAKLAND, for the Congress for New Urbanism.

On one side of Interstate 980 in Oakland rise the new glass skyscrapers of the city’s Uptown neighborhood, home to a bustling entertainment district and Silicon Valley’s spillover tech startups. On the other lies West Oakland, a “food desert” where two-thirds of residents live below the poverty line.

West Oakland residents should be able to benefit from the growing number of amenities available in Uptown, since they technically live in walking distance. But crossing the 560-foot-wide interstate and two frontage roads is a daunting task. It’s a prime example of one of America’s most divisive freeways—literally.

The 2019 edition of the latest Freeways Without Futures report, assembled semiannually by the Congress for New Urbanism, calls out North America’s 10 most ill-advised urban highways. These are the roadways urbanists love to hate: They isolate neighborhoods, subject residents to increased air and noise pollution, pummel property values, and sponge up resources that could be better used elsewhere. In an effort to speed their demise, every few years CNU gathers transportation and design experts to single out the worst offenders, ranking the freeways most ripe for removal based on alternative designs, traffic conditions, community and political support, and other factors.

Highway tear downs are a focus of growing attention, especially since many aging 1950s-era infrastructure projects have reached the end of their design lives and are due for refurbishment. Some cities are electing to remove rather than repair: So far, 16 North American cities have either demolished and replaced their freeways, and another nine have plans in the works.

San Francisco’s 1991 Embarcadero demolition is the poster child for this movement: Previously home to an elevated freeway, the site now features a walkable boulevard with shops and waterfront access. More recently, Seattle is currently aiming to pull off a similar transformation by removing its elevated Alaskan Way Viaduct for a street-level boulevard and waterfront space.

Foes of Oakland’s I-980 hope that this Bay Area interstate will soon meet the same fate. A short spur completed in 1985, I-980 is a repeat offender, having made CNU’s 2017 list, too. Its 18 lanes are excessive for current traffic loads (it’s at 53 percent of capacity), and plans to replace it with a surface boulevard have been around for years. But there’s fresh energy behind the idea these days, thanks to support from Oakland Mayor Libby Schaaf. A reworked design promoted by the nonprofit ConnectOAKLAND would shrink the road by 75 percent, gaining as many as 15 cross streets and reclaiming land that could be put toward affordable housing.

A rendering of a surface boulevard that would replace Interstate 980 in Oakland. ConnectOAKLAND, for the Congress for the New Urbanism.

As the CNU list shows, communities of color are often targeted by freeway projects. In Dallas, I-345 tore a hole in the heart of the mostly African-American Deep Ellum neighborhood, leading many original businesses to close their doors. Tampa’s I-275 cuts off Ybor City, a National Historic Landmark District that’s home to a Cuban-American community. And the construction of Syracuse’s I-81 paved over homes in the city’s historic African-American 15th Ward; New York Governor Andrew Cuomo called that freeway “a classic planning blunder.”

New Orleans’ elevated Claiborne Expressway is a particularly stark case study in how highway construction can transform a neighborhood. Its arrival in the 1960s destroyed the grassy 100-foot median of Claiborne Boulevard, the oak-lined main artery of the largely African-American Tremé neighborhood. That green space once hosted everything from neighborhood games to Mardi Gras parades. When the expressway was planned in the 1960s, the community didn’t have enough political power to resist the project. Demolishing the freeway and restoring the wide boulevard would hand that space back to the community. Vacant lots currently adjacent to the highway could also be redeveloped, opening nearly 50 acres of land for new commercial development or affordable housing. 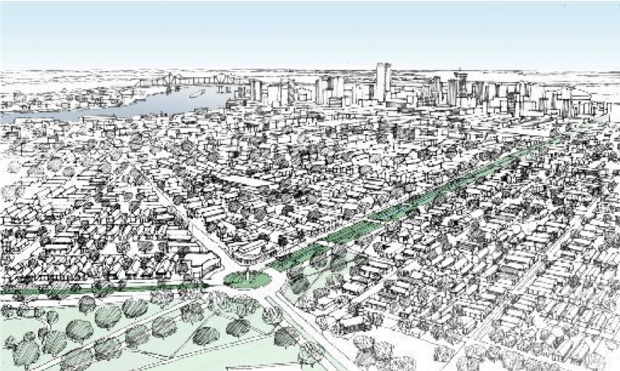 A rendering of a surface boulevard to replace the Claiborne Expressway in New Orleans. Mac Ball, Waggonner & Ball Architects, for the Congress for the New Urbanism.

The dream of liberating prime real estate is also at play in Portland and Louisville, both of which have highways (I-5 and I-64, respectively) running along their waterfronts. Serial bad-highway offender Buffalo claims two more much-hated 1960s thoroughfares on the list: The Kensington Expressway replaced the wide elm-lined Olmsted-designed Humboldt Parkway with an asphalt trench; the Scajaquada Expressway routes traffic right through the city’s Delaware Park, forcing picnickers and joggers to run alongside traffic. A scheme to convert that highway into a lower-speed boulevard ran into fierce opposition and was scrapped last year.

That’s a familiar narrative, as political and practical considerations often trump demolition dreams. Once built, urban highways can be hard to kill. Indeed, they often just get bigger: Last August, Denver spent $1.2 billion to expand I-70, demolishing 56 private residences* and 17 businesses in the process, including one of the few neighborhood grocery stores and part of a nearby elementary school. But last December, Colorado’s Department of Transportation settled a lawsuit and agreed to sponsor an independent study on the health impacts of the expansion. That’s in line with recent political developments in the state. Newly elected Governor Jared Polis campaigned on cutting vehicle emissions and promoting public transit, and last November, voters rejected two propositions to spend billions on highway widening and expansion.

The massive interregional traffic on Austin’s I-35 makes complete removal impossible without serious delays, but there are other options, the CNU report says. Some community activists suggest putting the freeway below ground as a tunnel, and covering it with a narrower, pedestrian- and bike-friendly boulevard with walkable shops and dedicated transit lanes. Booming Austin is already dealing with increased gentrification, but burying the highway could open up about 30 acres of land which could help meet the demand for affordable housing.

Cities that do undertake freeway removal projects should develop strategies to combat displacement, or “the removal of the highway could simply exert a new generation of inequity for communities that have seen enough,” the report says. One example of how to do it right: Rochester’s Inner Loop East project. With the extra land gained by filling in the sunken expressway, the city created three mixed-use developments that include below-market-rate apartments. Another partnership is currently in the works to dedicate 20 units to a supportive housing program for formerly homeless residents.

Many residents, or their descendants, who were impacted by initial freeway construction will also be able to see it torn down within their lifetime. For them, demolition could represent an opportunity to right a historic wrong—“provided they will take part in the renaissance that results,” as the report says.

*CORRECTION: An earlier version of this story had an incorrect number of homes demolished by the I-70 expansion.

Claire Tran is an editorial fellow at CityLab.