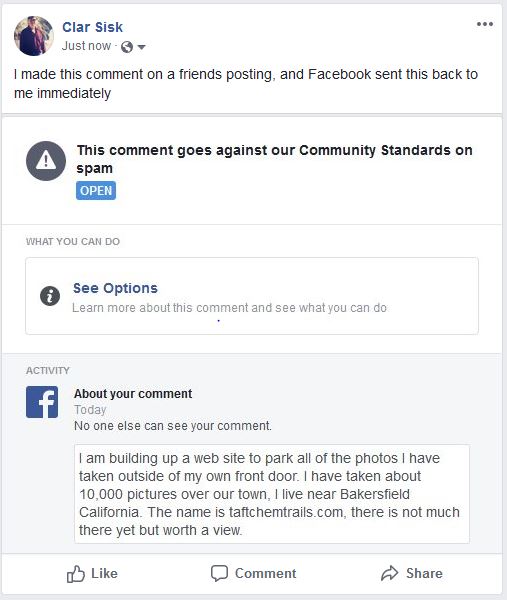 Until it happens to you, you will glaze right over it, and never give it a thought. This is a comment I made to a friends posting, and immediately Facebook sent this message back to me saying that I violated their community standards. I am having a hard time understand just how low Facebook community standards are. We are being censured and this is more dangerous than any of us can imagine. They do not want us talking about something we can all see happening with our own eyes, all we have to do is go outside and look up at the sky, you just can’t talk about it. Last time I was locked out of Facebook for 30 days. It is true, that Facebook is their own corporation, they own this site, not me, and they have control of content, and that is the point, they are controlling the content, this is serious. Facebook is allot like the press, none of us own the press, but once upon a time, we got our information from it, but it became corrupt and now is nothing more than a propaganda machine, as Facebook is becoming. I do not say anything that is not true, even the vulgarities are true, I often call entities names, I seldom call people names unless they have attacked me first. I am not seeking sympathy in this posting, like always my purpose of writing is to make people aware of what is coming. When 5G is rolled out, not only will the words you write be monitored by every single stroke of your keyboard, which the police can already do, but every breath you take, every beat of your heart, your temperature, and your emotional state will be accessible on the internet of things. Advertisement for a sleep number smart bed, are telling this to you on television right now, you are simply not focusing on the message, as are the temperate controls and the water faucets controls. People laugh at Cortez, when they should be shaking in their boots at her words, because she is speaking for the United Nations, and they are deadly serious. It is true, that at the moment the United Nations does not have much power that is visible, and the reason for that is that they do not want to reveal their magic methods, but right under your nose, they are working out their evil plans. There is going to come a time when the Nations of the Earth hand over their sovereignty to the United Nations, already Europe has done this, so has England, Australia, New Zealand, South America, Canada.